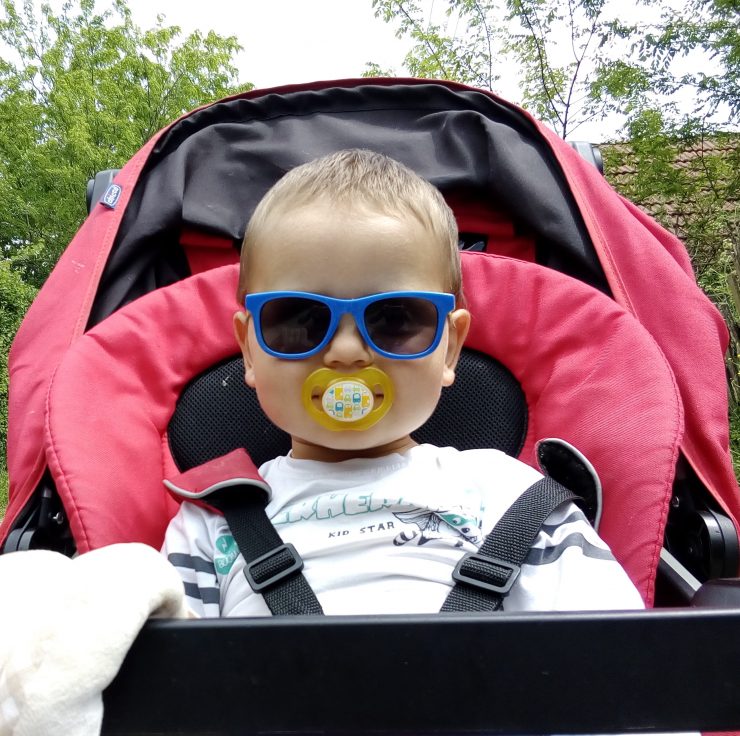 Well, the title says it all. If you’re a parent of a toddler and your child is still using her pacifier, you’re probably very anxious about it. So was I. My son wouldn’t let the binky out of his mouth and that used to drive me nuts. But not anymore. Let me share my story with you. Hopefully, it will help you wean your child off the pacifier or come to terms with him or her using it.

Simon and His Binky

A lot of parents are only too glad to offer the soother to their baby. Not only does it help the baby sleep and comforts her, but it also is recommended by American pediatricians because it’s believed to help prevent SIDS (Sudden Infant Death Syndrome). So there really is no harm in offering the pacifier to your baby. Don’t get me wrong – if your baby rejects it, don’t force her.

My Simon accepted the binky the first time I offered it. You see, while I did breastfeed him, there wasn’t always enough milk so his sucking reflex wasn’t fully satisfied. The binky made him calm down when I couldn’t. It even helped me feed him when he would get so hungry that he’d reject the breast and the bottle. So I’d pop the soother in his mouth, wait for him to calm down and then quickly replace it with either my nipple or the bottle.

Time went on and Simon kept using his binky. A lot. And that got me worried. I knew I had to wean him off it but that seemed to be an impossible task. I read that it was best to take the binky away when the baby turned one and I really tried to do that but I failed.

Then it started. Everyone had an opinion about my son using the pacifier. Every neighbour, old lady at a supermarket, and especially my mother kept bugging me about Simon’s soother. They scared me that it would damage his teeth, speech, jaw and make him stupid. I fought bravely but I didn’t feel happy because doubts crept in. I even cried a couple of times. It turned out I didn’t have to.

How My Son Gave Up His Binky

Have you ever seen an adult using a pacifier? Neither have I. Come to think of it, I’ve never seen a school-age child use one either. And I think that’s what we all have to remember when we stress about our toddlers loving their binkies.

Simon is a very active toddler. He doesn’t sit for five seconds and he now talks non-stop. As his speech started to develop (it’s still developing – he’s only 22 months old), he noticed that his soother was in the way. First, he tried talking with the soother in his mouth but I kept telling him that I couldn’t understand a word he was saying. I was very gentle saying that I simply encouraged him to figure out a way to make clear sounds. Soon he did and started taking the binky out of his mouth every time he wanted to say something. You can imagine that soon he got bored of taking it out of his mouth every ten seconds. So, he started throwing it away. That wasn’t a good idea either because he couldn’t find it when he wanted it. So the next step was for him to give it to me every morning, so that I’d wash it and put it in a cupboard. He’d ask for the soother at nap times and before turning in for the night.

Now he only asks for the soother at bedtime and falls asleep with it in his hand. I’m planning to take the binky away completely in a couple of weeks time, when he’s comfortable without it.

Are your toddlers using their soothers? How did you wean them off? Let me know in your comments!

This is such good advice! My son was the same. We started taking it away during the day and he soon became comfortable with putting it away everyday! We went 100% with him not having it because our dog literally ate our LAST one. It was perfect timing and even though there were some tears, it was a good way to explain! Lol!